Crewel Embroidery - What is it? 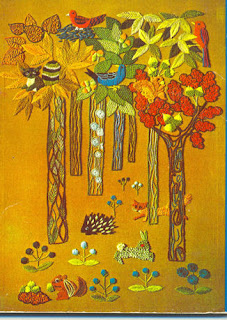 Crewel work is embroidery on practically any fabric in wool. It was traditionally worked in a two ply variety known as "crewel" which really gives the needlework its name.
Crewel embroidery was commonly worked for bed spreads, valances and curtains for four poster beds, wall hangings, pockets (two of which would be tied under the waist, underneath a dress) and petticoats. Crewel embroidery reached its peak in 17th century England and 18th century America.
Crewel embroidery is also distinctive because of the stylized shapes and motives used. Many crewel worked designs typically feature trees, fruit, flowers, birds and dragonflies. Shapes are usually filled with a variety of stitches to represent solid blocks of colour. Some common stitches used include Chain stitch, Roumanian stitch, Stem stitch (sometimes referred to as crewel stitch), Split stitch, Block Shading, Long and Short stitch, and Laid work. Although crewel embroidery is certainly not limited to these.
Needles should be medium length with long eyes. These are available at most craft stores and come in a variety of sizes. They will be labelled crewel or embroidery needles.
I have included some samples of crewel embroidery. They have been taken from "The Craft of Crewel Embroidery" by Erica Wilson 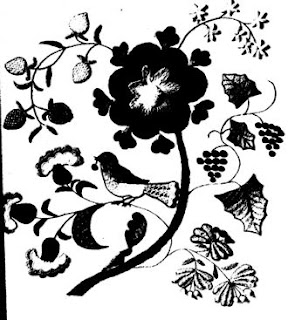 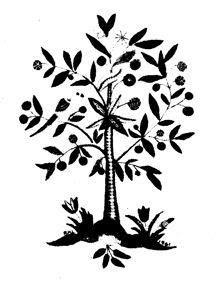 If you enjoy hand embroidery click here for some original designs.

Posted by Lenna Green of Stitching Cow at 10:52 PM

I would love to know if it is possible to have crewel embroidery be automated by machine. I love the look... but not the patience!

PLEASE PLEASE tell me you know where i can find an embroidery just like that one!? The one with the trees and the animals.. I used to work in a nursing home and after i left one of my favorite residents died, and she had one a lot like it except it had snails. Ever since i have been collecting embroideries. I have 11 right now and i'm the process of ordering two more! It would me so much to me if you could tell me where to find one like it.
Thank you -Melinda

Melinda,
The graphic is from a book called The Craft of Crewel Embroidery by Erica Wilson, although unfortunately it does not have any patterns.
Sorry about that, good luck on your quest.

This is a really informative article for readers and you have provided an excellent details in your post APPRECIATED!!!.

Lenna Green of Stitching Cow
Do you love to sew and make things with fabric, threads and yarn? Me too. Welcome to my friendly community. Please feel free to add your comments to the posts here and to visit the Stitching Cow website where you will discover sewing and craft patterns as well as helpful "how to videos" and resources. Have fun!

Softies and Toys to Make

Please do not use graphics or content from this blog without crediting the author and supplying a direct link back to this blog, thanks.